Do Background Checks Include Drug Tests?

A background check is an extensive look into a potential employee’s past experience and choices. It often includes a criminal history search at the county, statewide and federal levels as well as an employment and education verification. So do background checks include drug tests? Employers can also choose to add on extra searches, such as a credit check, a social media search, or a drug test.

Do Background Checks Include Drug Tests? Is Drug Testing Required?

Whether or not a drug test is included in a pre-employment screening is completely up to the discretion of the company. The majority of employers across the United States are not required to drug test by law. In fact, many state and local governments limit or prohibit workplace testing in that area, the exception being jobs where testing required by federal or state regulations.

The federal guidelines on drug testing are found in the Drug-Free Workplace Act of 1988. While private companies are not required to follow the rules outlined in this document, it is encouraged by the government to use these protocols when creating a drug testing policy for a company.

The document states that private non-union employers do have the right to test an applicant for illegal substances. In unionized workforces, the implementation of testing programs must be negotiated between the union and the company in question.

Who Has to Drug Test?

There are certain industries where drug testing job candidates are required.

All civil service jobs, whether they are on the federal, state or local level, are obligated to perform pre-employment drug testing. This includes such positions as public school employees, road construction and maintenance crews, social services staff and law enforcement officers.

All Department of Transportation workers must also be tested. These positions have strict guidelines concerning drug or alcohol usage. For example, commercial vehicle operators are not allowed to be hired if they are using certain prescribed substances, such as medical marijuana.

Who Chooses to Drug Test?

Other industries might not be required by law to test, but it is a standard practice in these fields.

Healthcare is an excellent example of this, along with any position that involves operating a commercial or motor vehicle or heavy machinery, such as manufacturing. Many hourly positions, such as retail or food service positions, also require a drug test to be employed.

Even outside of these skilled labor positions, drug testing is prevalent. Over 80% of the Fortune 500 companies require drug and alcohol testing of their employees.

Companies have found that consistent drug use in employees often comes with the side effects of frequent absenteeism, lower production of quality work and even injury on the job.

All of these negative aspects lead to a loss of income for the business, causing hiring managers to seek out employees that would provide a better investment.

How Could Companies Test?

There are several types of drug testing that a company can use. Traditional lab-based urine testing is the most common, with around 83% of companies implementing these tests.

Hair specimen analysis, on-site oral fluid screens and breath alcohol tests are alternative options. All of these tests are designed to screen for a multitude of illicit substances, with the urine and hair sample testing able to look for for up to 10 different classifications of illegal drugs.

If you’re asking do background checks include drug tests, you may be wondering about marijuana. As of publication, seven states plus the District of Columbia have legalized recreational marijuana use. In fact, due to the number permitting medicinal or limited-medicinal usage, only seven states have no legalization law on the books at all.

Marijuana use remains illegal under federal judgment in the U.S. What does that mean for you? It means it’s still legal for employers to test their employees for marijuana and refuse or terminate employment based on a failed screening no matter what state an employee lives in. Marijuana is still considered a Schedule I controlled substance under the federal Controlled Substances Act, putting it on par with such drugs as heroin and ecstasy. Visit here for an visual on marijuana legalization in the U.S. as it stands today.

Could Someone Be Hired Even if They Fail?

Some companies will still hire or keep on an employee after the applicant tests positive, but it is a low percentage. Often, if the employer does decide to pursue an applicant who tested positive, he or she would be hired on a probationary basis or need to retest at a later date.

Successful companies utilize pre-employment screening to ensure they are not only hiring a qualified applicant, but also gaining an employee who is a good investment for their brand. Often, these businesses will use drug testing to help determine if a candidate’s habits and values are a match with the company’s.

So, for job seekers, it might be better to be safe than unemployed.

Do background checks include drug tests? Find out what goes into drug tests here. 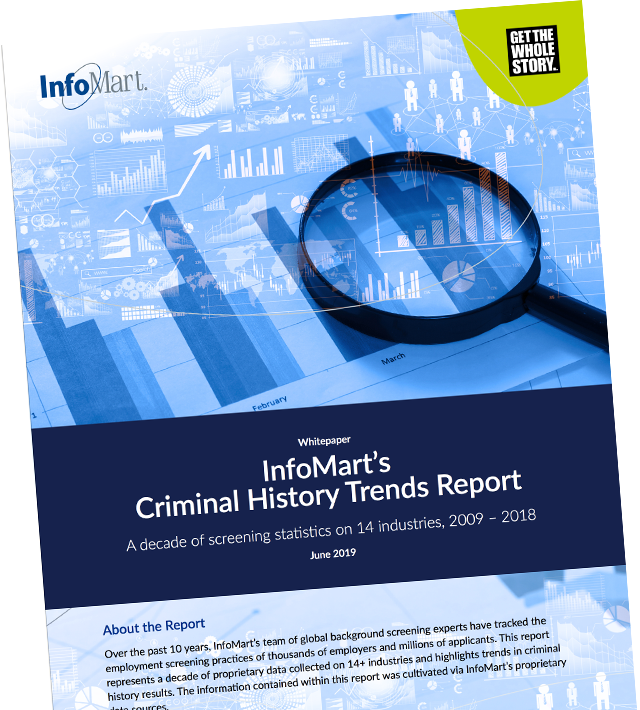 Uncover insights that include: