Canada Is Legalizing Marijuana – What Does That Mean for Me?

Tammy Cohen, PHR, SHRM-CP
April 13 2017
With the recent news revealing that Canada has introduced a bill to legalize recreational marijuana use, making it the second nation to authorize marijuana for the entire country, many companies are left wondering how this will influence their employment screening practices.
Canada’s bill, which is expected to pass, will require each of Canada’s provinces to decide how the drug will be distributed and sold within its borders. While alcohol and marijuana will not be handled exactly the same in other regards, the government will need to develop systems for monitoring impairment due to marijuana usage, in cases such as driver impairment and on-the-job safety. This large-scale legalization so close to home leaves many wondering: will the United States follow suit, and if so, how will it affect employment screening?

What Is the State of the U.S.’s Legalization?

As of publication, seven states plus the District of Columbia have legalized recreational marijuana use. In fact, due to the number permitting medicinal or limited-medicinal usage, only seven states have no legalization law on the books at all. 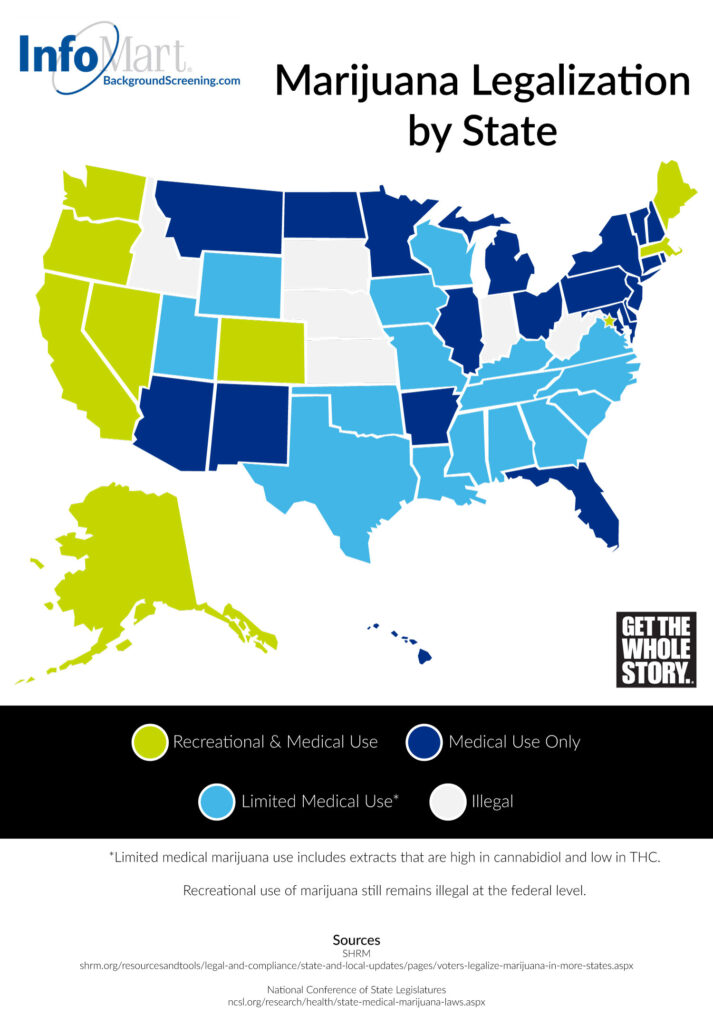 Despite varying state law, in the U.S. marijuana use remains illegal under federal judgment. What does that mean for you? It means it’s still legal for employers to test their employees for marijuana and, no matter what state an employee lives in, it is still legal to refuse employment or terminate employment due to a failed drug test. Marijuana is still considered a Schedule I controlled substance under the federal Controlled Substances Act, putting it on par with such drugs as heroin and ecstasy. Until the U.S. follows Canada’s lead, your company is protected under federal law if you decide to have a zero-tolerance policy. However, with the increase in decriminalizing marijuana, and our northern neighbor’s road to legalization, companies need decide if and how they will alter their drug policies.

How Does This Affect HR and Background Screening?

Drug-free workplace policies generally include the prohibition of marijuana use, but with a growing population pushing for us not to consider ‘marijuana’ and ‘drugs’ as synonymous, your company may need to rethink their policy. Safety and productivity concerns bookend much of the conversation regarding employee drug policies. In industries such as transportation and education, employers prohibit marijuana use for obvious reasons. But several companies have already removed marijuana from their employee drug screening programs, particularly post hire. In states with legalized recreational usage, some employers have stopped screening for marijuana because it significantly decreases their hiring pool. As stated above, due to federal law, your company can legally refuse employment to anyone who fails his or her drug test. Experts agree that regardless of a company’s stance on marijuana usage, they need to provide clear-cut drug policies, and they need to make that information readily available to their staff. Whether you continue to enforce a zero-tolerance policy or you’re relaxing your restrictions, be certain to: Does your company operate or hire out of a state that has legalized marijuana? Has your company already done away with drug testing for marijuana? What kind of conversations is your company having regarding drug policies? Tell us about your experience.